Music for percussion and organ

This program features the virtuoso percussionist Terry diLuciano, who will combine his many instruments with the organ for this unusual program. Since this is a combination rarely heard, the program will consist of arrangements for the organ, either accompanying or being accompanied by various percussion instruments.

It will include ‘Fanfare for the Common Man’ and ‘Rodeo’ by Aaron Copland, and a special presentation of the poetry of Ogden Nash, written to enhance ‘The Carnival of the Animals’ of Camille Saint-Saens. Hee Haw!

WHAT: A service of sung Evening Prayer, sometimes known as Vespers, will be held on the Fourth Sunday in Lent ((Laetare Sunday), March 15 at 3:00 PM.

WHERE: St. Colman Catholic Church, 219 East North Street, Washington Court House, Ohio. The church is two blocks north and one block east of the Fayette County Courthouse. There is ample parking in lots around the church and plenty of street parking as well.

WHEN: Laetare Sunday, March 15 at 3:00 PM. Laetare Sunday is one of the two Sundays in the church year which are sometimes called ‘Rose’ Sundays in reference to the color of vestments often used. (The other such Sunday is the Third Sunday in Advent, just before Christmas, when the St. Colman Choir has traditionally presented it’s Advent Lessons and Carols service.)

It is the mid-point of Lent, the 40 days of preparation leading up to Easter, and the over-all emphasis of the day is a bit less penitential in nature than the other days in Lent (the color for which is purple).

DETAIL: Music will be provided by the St. Colman Choir, accompanied by organ and a string quartet of students from Cedarville University. As part of the music for the service, they will perform the first section of Part Two of “Messiah” by George Fredrick Handel. In addition, there are psalms sung to chant as well as a Magnificat (by Herbert Howells) and ‘Evening Hymn’ by Gardiner.

Other participants will be Seminarians from The Pontifical College Josephinum in Worthington, Ohio, one of whom is Brett Garland, for whom St. Colman is home parish.

The service is open to the public; there is no admission charge. A free-will offering is taken in support of music at St. Colman.

St. Colman organist, Craig Jaynes, is joined by Cedarville University professor Carlos Elias in a program of music for organ and the unusual and wonderful combination of organ and violin by two of the unsung geniuses of late Romanticism, set in the stunning acoustics of a building built during the same time period.

St. Colman organist, Craig Jaynes, will perform solo organ works and will join with Cedarville University professor and violinist, Carlos Elias in a program of music by Joseph Rheinberger and Max Reger, two of the unsung geniuses of the late Romantic era. The Rheinberger works are singularly unusual in that they are original for the two instruments, not transcriptions, a combination that is rare for serious composers (and for reasons unknown as it is a particularly effective one). They will be performed in the superb acoustics of St. Colman church, which was built at the same time these two composers were at their most productive. 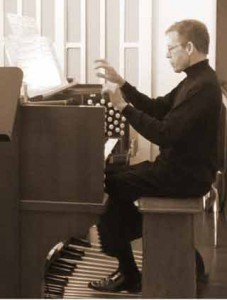 has been the Music Director and Organist at St. Colman since 2005 and also serves as organist for the choir at St. Columbkille Church in Wilmington, Ohio. He attended Wichita State University, Kent State University (BA-music), The Ohio State University, and Clark State Community College (AAS-RN); and studied with Paul Lunquist, Dorothy Addy, Virgil Fox. He’s been an active church musician for churches in Kansas and Ohio for 52 years and is a Registered Nurse with Community Care Hospice. 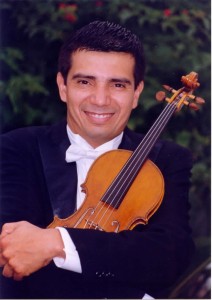 is professor of strings and orchestra at Cedarville University and was recently appointed Director of the Springfield Youth Symphony. He has won performance prizes in El Salvador and California; represented his country (El Salvador) in the World Philharmonic Orchestra under Lorin Maazel; he performed in solo recitals and with orchestras in the US, El Salvador, Argentina, Bulgaria, Japan and Korea; participated in festival orchestras in Colorado, California, Vermont, Florida, Puerto Rico, Japan and Italy. He hold degrees from Biola (California) University, Duquesne University, and the University of Cincinnati, College Conservatory of Music. He and his wife, pianist Andrea Arese-Elias, gave their New York debut at Weill Hall in Carnegie Hall in 2002 and their recently released CD “Let’s Tango” was named “Best of the Best” in the International category on eMusic in the US and the United Kingdom.

This concert will be the first collaboration between Mr. Jaynes and Mr. Elias.

Music for percussion and organ

This program features the virtuoso percussionist Terry diLuciano, who will combine his many instruments with the organ for this unusual program. Since this is a combination rarely heard, the program will consist of arrangements for the organ, either accompanying or being accompanied by various percussion instruments.

It will include ‘Fanfare for the Common Man’ and ‘Rodeo’ by Aaron Copland, and a special presentation of the poetry of Ogden Nash, written to enhance ‘The Carnival of the Animals’ of Camille Saint-Saens.

Music of Rheinberger (for violin and organ) and Reger, with Carlos Elias, violinist

Organist Craig Jaynes will be joined by Carlos Elias, international performer and director of strings and orchestra at Cedarville University.

Continuing with a theme of contrasts, this program features two composers in the Romantic style whose writing is, in many ways, nearly opposite.

Josef Rheinberger was a melodic master and exercised his gift amidst harmonies of simple loveliness. He was certainly capable of contrapuntal writing, but simply used it as tool in his tuneful compositional kit.

His works for violin and organ are almost totally unique among serious composers. The dearth of original works for these two instruments is puzzlesome, especially when one hears how wonderful the combination can be.

Max Reger wrote with lots of ink and his works can be nearly opaque with sound. He is at his best when serving as one of Bach’s successors as a master of the art of counterpoint and it is this aspect that will be emphasized in this program.

Music of Vivaldi and Faure

The Choir of St. Colman Church will be joined by the choir of The Presbyterian Church of Hillsboro, Ohio (Roger Smith, director) and instrumentalists from the Cincinnati Conservatory of Music to perform two of the great works of the choral art. On a weekend which contains both a great and ancient Christian feast day (All Saints, November 1) and the annual memorial day of All Souls (November 2), it seems fitting to pair these two towering works.

The Vivaldi ‘Gloria’ is an elaborate and extended setting of the oldest Christian hymn, “Gloria in excelsis Deo” (“Glory be to God on high”). For choir, soloists, and instruments, it is one of the first, probably best known, and certainly one of the most beloved choral creations based on these words. It is written in Vivaldi’s trademark ebullient style while still capturing the many nuances of the extended hymn.

Gabriel Faure’s famous ‘Requiem’ was written as a setting of an actual Requiem Mass for the Dead. Many famous requiem masses had been written by earlier composers (Mozart, Berlioz and Verdi, among many others), but their character was nearly always one of fire and brimstone, with a focus on the ‘Day of Wrath’. By contrast, Faure wrote the first of what might be called ‘the lullaby requiems’ which emphasized mourning and restfulness, with only a nod to ‘the wrath of God’. Also in contrast to the rhythmic emphasis of the Vivaldi piece, the Faure uses soaring and gorgeous melodies and luscious harmonies to make its point. It is easily one of the loveliest choral works ever put to pen and a favorite of both participating choirs.