All Souls Concert available for sale 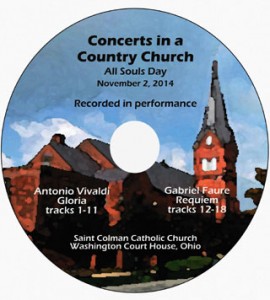 Concerts in a Country Church, an annual series of concerts of serious music held at St. Colman Church in Washington Court House, Ohio has announced its first CD of a recorded concert.

The program was the first of the second year of the series (2014-2015) and was recorded live in performance on November 2, 2014. Participants involved were the St. Colman Choir, the Choir of The Presbyterian Church in Hillsboro, Ohio, instrumentalists from the University of Cincinnati College Conservatory of Music and Xenia, Ohio, with soloists. Price each is $10.00. CD is available at the February 22, 2015 Concert.

The works performed were “Gloria” by Antonio Vivaldi and “Requiem” by Gabriel Faure. Both were performed in their entirety.

“We have not, to date, released any recordings of our performances,” said Craig Jaynes, Director of Music at St. Colman and of the series.

“Doing music for release as a recording is simply a different art than that of live performance and we’ve focused on the impact of the live performance in a terrific and acoustically spectacular space. However, this performance, although not perfection, was good enough that we wanted to be able to respond to the many requests for a CD and so here it is.”

The CDs will be available for purchase for the first time at the next concert of the series which is Sunday, February 22 at 3:00 PM at St. Colman Church in Washington Court House. The concert will feature Mr Jaynes, organist and Carlos Elias of Cedarville University, violinist in works of the Romantic Era.

The series has also announced the creation of a dedicated web-site for music at St. Colman: www.stcolmanmusic.org. The website will contain information on the concert series, along with dates and times. It will also eventually contain a weekly listing of the music to be used by the Choir of St. Colman for the 9:00 AM Mass on Sundays and all special services, such as during Holy Week. Jaynes said, “We are so pleased that the music program here has attracted folks who are not members of the parish as well as from out-of-town to join us. The website will enable us to keep interested persons up to date with the special things we are doing. We hope to expand it in the future with background information on the music and the composers; the world of serious music is so deep that one can never really have too much information about it!”